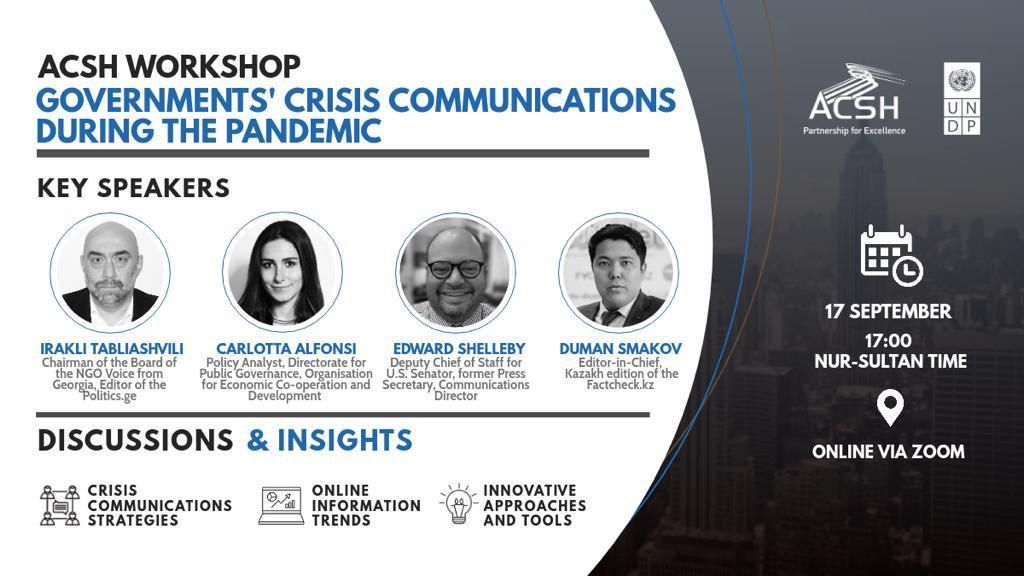 Representatives of more than 20 countries discussed effective strategic communications applied by governments during the COVID-19 pandemic. Online session was held based on the initiative of the Astana Civil Service Hub (ACSH), supported by the United Nations Development Programme (UNDP). Alongside with the government representatives and other participants, experts from Georgia, Kazakhstan, OECD and the United States shared their countries’ best practices in crisis communications.

The workshop was attended by more than 140 people – heads of authorized government agencies, experts and practitioners from across Europe, Asia, America and Africa, as well as representatives of international organizations such as the UN, OECD, USAID and WGS. The Under-Secretary-General of the United Nations and Chairman of the United Nation International Civil Service Commission, Mr. Larbi Djacta, also participated as a guest of honor. In his written remarks to the participants, he emphasized the relevance of the topic and appreciated the organizers, noting that the ACSH is always at the front of bringing up challenging topics for discussion.

During the session’s opening, the Chairman of the Steering Committee of the Astana Civil Service Hub, Mr. Alikhan Baimenov, noted that “under the crisis conditions, public trust becomes even more important. Trust is a key factor not only as a social value, but also as an effective administrative capital. The level of trust serves to support the efforts of governments, societies, and economies to overcome the crisis, and effective communication strategy is an important tool for building public trust and managing crises”. The session was also co-opened by Mr. Vitalie Vremis, UNDP Kazakhstan Deputy Resident Representative.

The event also featured leading practitioners who are directly involved in the development of strategic communication during the crisis, among them Mr. Irakli Tabliashvili, Chairman of the Board of the “Voice from Georgia” NGO, editor of the “Politics.ge”, one of the key people behind recommendations for the Georgian Government in the framework of media research; Ms. Carlotta Alfonsi — Policy Analyst, OECD Public Governance Directorate, who is focusing on innovative communications and disinformation; Mr. Edward Shelleby — Deputy Chief of Staff for U.S. Senator, former Press Secretary, Communications Director, and lastly, Mr. Duman Smakov — Editor-in-Chief, Kazakh edition of the Factcheck Kazakhstan project, a media expert.

Noteworthy, Mr. Tabliashvili pointed out that “during the first wave of the pandemic in Georgia, the work on communication with the public, including informing all citizens about methods and strategic decisions, was undertaken by three leading and recognized scientists, which became known as the “Three Musketeers”. This tactic has increased public confidence and collective responsibility without over-dramatizing’’.

The OECD representative, Ms. Alfonsi, noted that the during this pandemic, governments have increasingly put public communication at the forefront of efforts to counteract the COVID-19 “infodemic” and support policy goals. She stressed that “the efficacy of these actions often depends on grounding them in the open government principles, chiefly transparency, to build trust in public institutions”

In turn, Mr. Shelleby noted that “faced with fewer communications tools and this deeply divided public, the US Government has had to find creative ways to communicate information in the best interest of public health and to combat misinformation. Elected officials across the government face a credibility problem with the public, so have often teamed up with more trusted sources – like public health experts and university professors – to help convey their message about what we should be doing to combat COVID-19”.

Lastly, Mr. Smakov stressed that “the current situation in Kazakhstan caused by the pandemic has shown the importance of reliable information in overcoming the crisis for both for public authorities and for the public“.

The workshop touched upon effective digital communication strategies, government-media interaction techniques, coherent and coordinated messaging and outreach to wider public. At the end of the workshop, the participants thanked the organizers of the event and noted the practical benefits of holding such collaborative discussions