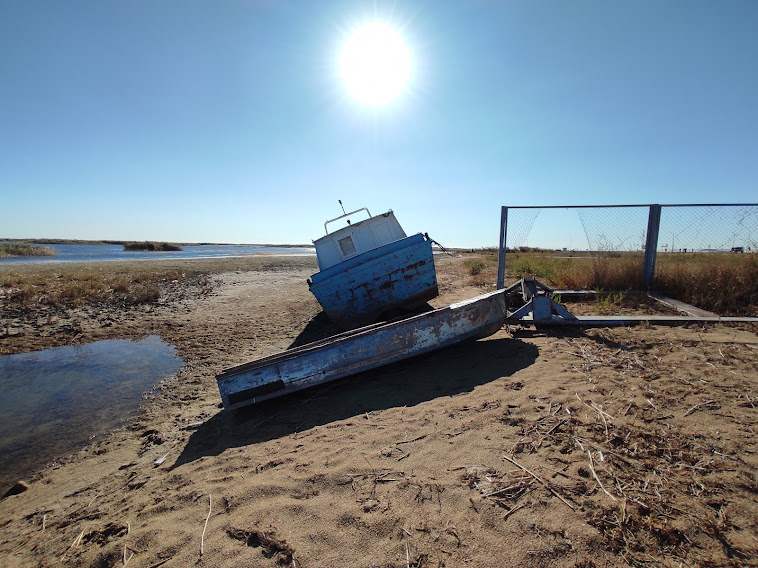 The impact of global warming, frequent droughts and poor harvests negatively affect life in the village of Aralkum in Kyzylorda region. Every day, sand and salt come to the village, brought by the wind from the bottom of the almost disappeared Aral Sea. Representatives of the village cultivate saxaul to shelter from the sand and salt storms but that drop in the sea will not solve all the problems.

It is known that the sea gathers drop by drop. This also applies in business. If you do something together, there will be a result. The photo of the Aral Sea resembles the lines from the song: “… a drop in the sea is not visible.” We went to the Western region of the Aral Sea to see everything with our own eyes.

The village of Aralkum is the administrative center of the Aralkum rural district, located in the Aral district of the Kyzylorda region of Kazakhstan.

There is no escape from the sand 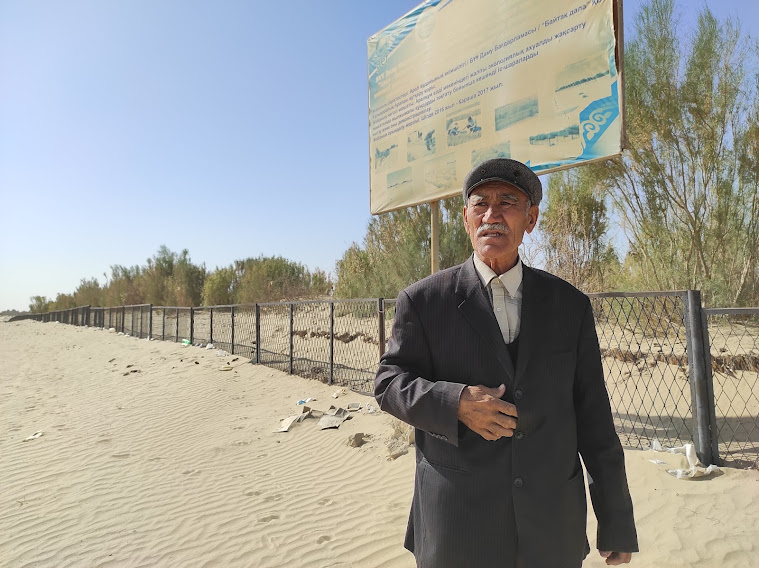 The chairman of the public council of the rural district Bakyt Kirbasov recalls when the sea began to recede, the village of Aralkum remained under the sand, people began to move, and now only about 260 families remained.

– In 2016, at the expense of non-repayable loans from the UN Development Fund, representatives of the International Fund for Saving the Aral Sea, the administration of the Aral region, NGO “Baytak Dala”, planted saxaul, zhuzgun and other herbs, and fenced them with an iron lattice to keep the advancing sand and the village did not stay under it. They left a road for communication. However, these measures are not enough,” says Bakyt Kirbasov, a resident of the village of Aralkum.

In the “Report on the activities of the international fund for saving the Aral Sea 2013-2016” it is noted that: “within the framework of the World Bank project, a forest nursery and a research station for the cultivation of saxaul (32 hectares; 4, million pieces) and granulation of seeds were built, forest planting machinery and equipment were purchased. Afforestation on the drained bottom of the Aral Sea (ODAM) was carried out on an area of ​​61,000 hectares (52,000 hectares for planting and 9,000 hectares for sowing), 20 demonstration plots were created (each 5-10 thousand hectares), with a total area of ​​168 thousand hectares for the purpose of testing new approaches to farming without harming forestry.

ID MSFA in RK carried out work through the NGO Baytak Dala on afforestation on the drained bottom of the Aral Sea, including planting and sowing saxaul. The project assisted NGOs in purchasing fuel and lubricants for the period of soil preparation and saxaul planting”. 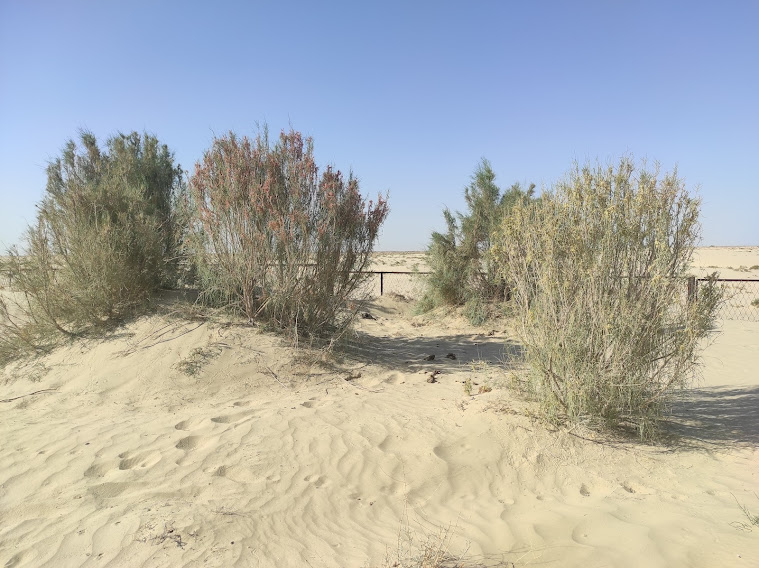 – We made beds of reeds so that small saxaul saplings would take root and would not remain under the sand. If you look from one side of this lattice you can no longer see it.

There is a lot of sand on one side of the fence, you need to hire a loader and take out the sand, because the sand has come very close to the village, – Bakyt Kirbasov demonstrates to reporters. In the first years, the sand approached the village by half a meter, now some houses on the outskirts are not even visible from under the sand. The amount of the sand increases every year.

Residents have repeatedly raised this issue, Bakyt Kirbasov personally spoke at a conference in Kyzylorda on the Aral Sea problem, asked UN representatives to continue the project further, but so far to no avail.

– It is necessary to keep planting saxaul to fence from the sand. Next to the forest plantation there are graves of our ancestors, some of the graves are already covered with sand, this is disrespect for the dead. We must honor their memory. It is not good that the graves of our fathers and grandfathers remain under the sand. 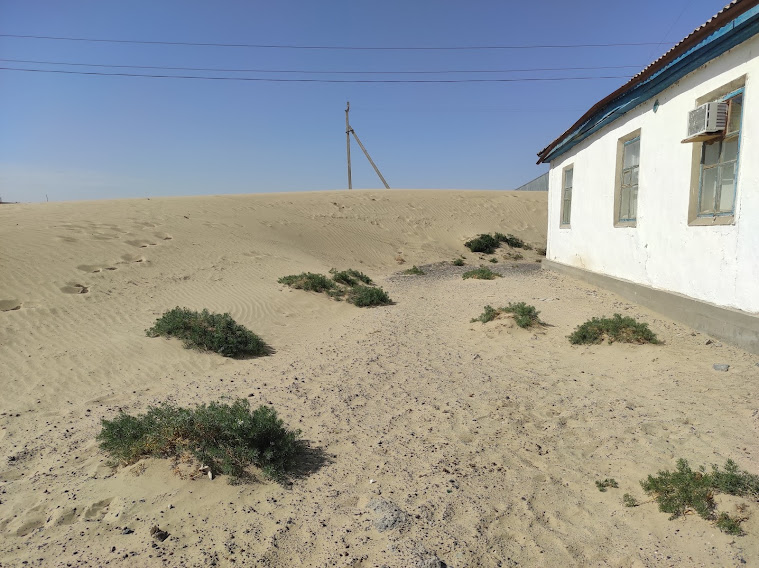 When there are sandstorms, we are often asked: why don’t you leave, do you want to move. Where will we go? This is our land. We were born here, grew up, buried our parents. I’m seventy years old, I’ve worked on the railroad for forty-four years, now I’m retired, where will I go? Even if we go somewhere to eat, who will meet us? Therefore, the people of Aralkum are used to it and do not plan to leave anywhere,” says Bakyt Kirbasov, a resident of the Aralkum village.

Kazakhs have an ancient custom to worship a lonely tree, tie colorful ribbons to branches, ask for good luck and help along the way. According to legends, the souls of ancestors live in the branches of a tree, in the leaves.

For a Kazakh, a tree is important – a family tree so called “Shezhire” has a sacred meaning. It is believed that the Kazakh family is transmitted through the male line. Trees were perceived in the minds of people as living creatures with magical abilities, so they could not be chopped down, desecrated.

“The Kazakhs have a restive character, they do not obey, they stand their ground, they are strong. Saksaul is the same. But if you beat a tree against each other, it breaks … and with the Kazakhs: if you set them against each other, they will swear for a long time, divide by tribes. The characters of the saxaul and the nomadic people are very similar” – this is how the Governor-General of Semirechye Gerasim Alekseevich Kolpakovsky wrote in a letter to the emperor.

Some of the residents began to leave, but they did not go far and still live in the same conditions.

“There is no escape from the sand. How will you run away from it?” Says Bakyt Kirbasov, a resident of the Aralkum village.

Residents hire a loader in order to take out sand from their yard. They pay for everything themselves, no one compensates them for this. For renting a forklift, the price varies from twenty to eighty thousand. There is a risk that the sand will continue to fill up their yards.

– The planted saxaul is not enough, you need to plant at least 150 meters on both sides. This may slow down the sand a little. On behalf of the residents of our village, I ask the authorities to pay attention to this. If you tell someone no one will believe, twenty or thirty years ago there was so much greenery, trees, and now there is only sand all around,” – says Bakyt Kirbasov.

The nursery of the Aral forestry enterprise “Aral State Institution for the Protection of Forests and Wildlife” of the Department of Natural Resources and Environmental Management of the Kyzylorda Region was founded in 1990. Bektemir Zhusupov started working in 1995. He started working as a forester, since 2010 as a foreman. The main task of forestry workers is the preservation and cultivation of forest land, protection and agitation, propaganda and protection from fires.

According to Bektemir Zhusupov there is no water on the territory of the Aral Sea, because of the wind, salty dust is flying from its sandy bottom.

“We are obliged to stop this, we bring saxaul seeds, we plant, we grow annuals,” says Bektemir Zhusupov, a foreman for the care of the forest.

Saxaul is planted on an autumn day. They grow for a year in the nursery. After that, the seedlings are brought and planted on the sea territory using special equipment. This spring, from 1-5 thousand hectares have been sown.

In previous years, everything was allocated by the Damu Development Bank: new equipment, clothing, wagons, tractors, tools for planting saxaul. Planting was carried out with 63 workers. 5 thousand hectares were sown in 10-15 days. From equipment they used tractors, planting machines (for 4 people).

Sowed by airplane and machines. 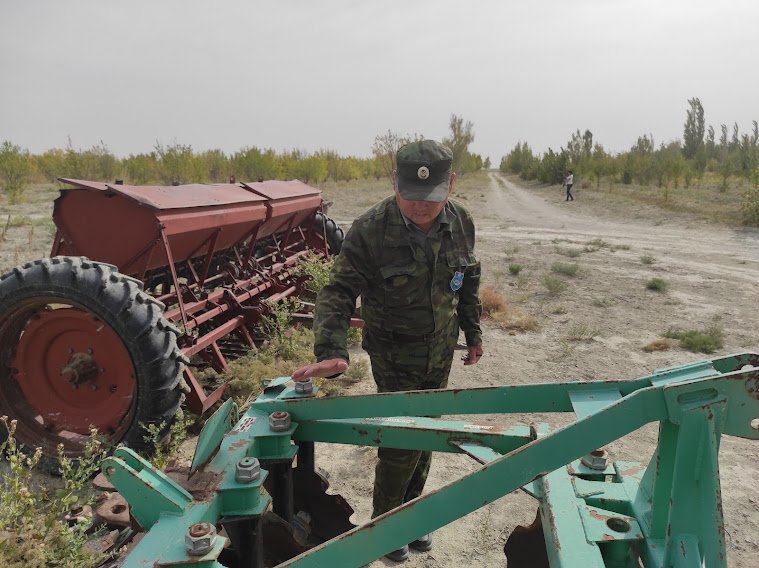 – Now people are transported by car, at that time they were transported and brought by helicopters and airplanes”, – Bektemir Zhusupov shares his memories.

Saxaul seeds are taken from the nursery. Saxauls, sown in 1995-96, are currently producing good grain. They bring the grains to the warehouse, where the office and hangar are located. They are dried there. It takes 15-20 children to clean the grain on the street. After cleaning, they put it in a tent. Then the grains are brought to the nursery and planted.

– Saxaul grows well. This year, out of the 100% planted, fifty have grown. Sand landslides stop, not like they used to. The planted seedlings should now grow to 30-40%. If it is 30%, then it is considered normal, because this is the bottom of the sea, the soil is salt marsh, – says the master of forest care Bektemir Zhusupov.

The cost of 1 saxaul changes every year, the seedlings of a small one-year saxaul sapling are bought for 20-30 tenge. If someone breaks or steals it, the prices for it will be separately according to the tariff. An administrative penalty is added, the loss of saxaul is included. In total, about 70-80 thousand cubic meters of saxaul have been cut down. Local people use saxaul for firewood. At the moment, there have been no such cases yet. 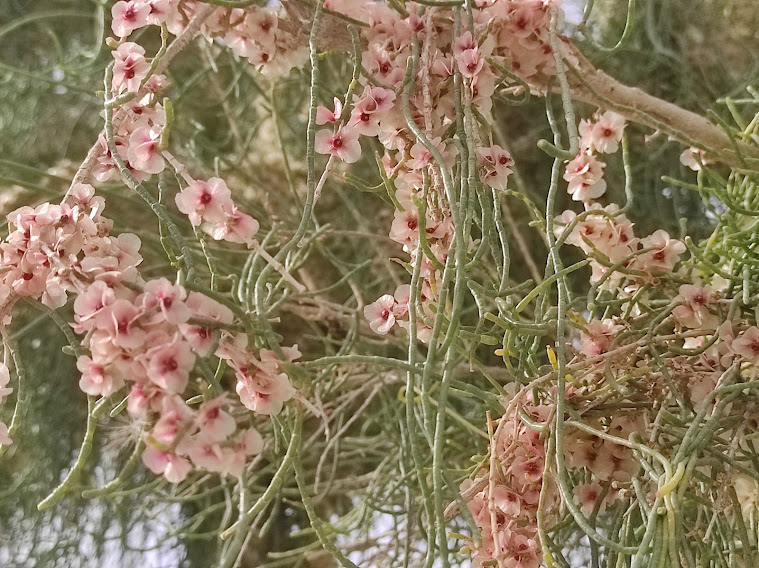 Saxaul logs hardly smoke, give heat and burn out for a long time. Since ancient times, it has been used as fuel for cooking and heating yurts.

Now everything is gasified in the city of Aralsk. People use saxaul as firewood only for barbecue. They say that people come and buy it from the train. There are inspectors in the Aral city and in other settlements. According to them such cases happen 1-3 times a year.

The local population does not participate in the landscaping work. Foresters take part in the planting; Bektemir Zhusupov did not see those who came to the aid of local residents. On the contrary, on the land where the foresters have planted saxaul, the locals run livestock.

There is no harvest in the fields due to two years of bad weather. But on the territory of the nursery saxaul grows well. The foresters keep everything under control and yet the cattle come in.

– Let the inhabitants do not help us. We will be helped if they keep an eye on their cattle,” says forest caretaker Bektemir Zhusupov.

In the “Report on the activities of the international fund for saving the Aral Sea 2013-2016.” it is noted that: “Since the beginning of the 1960s, in the Aral Sea region, the number of days with temperatures above 400 C has doubled, in some places the temperature is 490 C in the shade.”

There were no poachers for about 10 years. Foresters do not allow anyone to touch their territory. Currently, the institution of the Aral region employs 55 people. There are 21 foresters-inspectors, 8 workers caring for the nursery, watering, weeding weeds. The work of the inspectors includes a protected area of ​​574 160 hectares, growing and increasing seedlings, protecting animals and birds. The salary of workers is 80 thousand, inspectors receive 110-130 thousand, depending on education.

Seeds are sown and planted on the territory of the school and social facilities, which is under the jurisdiction of the district akimat. During the years of independence, 194 thousand hectares (or 8.9% of the total bottom area) in the Kazakh part of the drained bottom were sown with saxaul, sarsazan and tamarisk. Today these plantings grow naturally. (The yield of these plantations was 30-35%, in some years 5-11%).

However, the work carried out in part of Kazakhstan is not enough to stop salt and dust on the dry bottom of the Aral Sea. 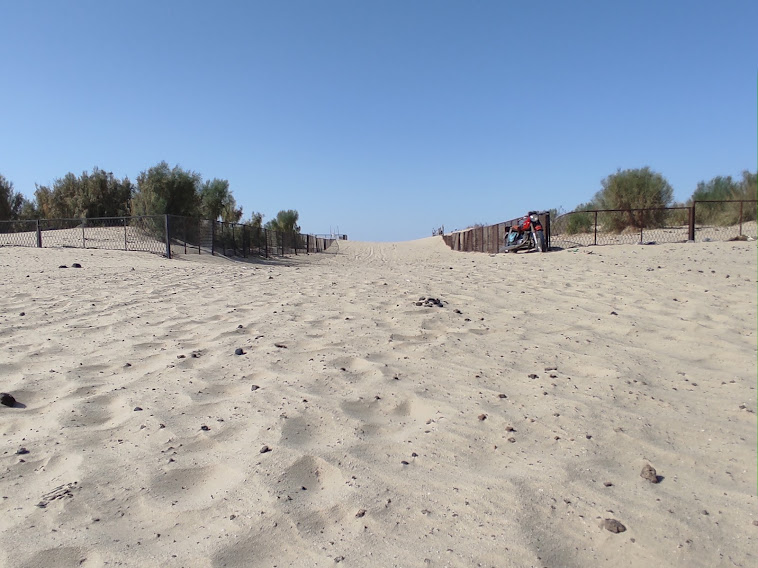 This article was prepared with the support of the International Center for Journalism MediaNet. It will be continued in the next article.

This publication is part of the project “Facilitation of the cross-border environmental reporting in Central Asia” implemented by MediaNet International Centre for Journalism in cooperation with the international media development organization DW Akademie and funded by the German Federal Foreign Office (Auswärtiges Amt).

You can find the Russian version of this article in the link below: