Forestry workers from different regions of Kazakhstan grow saxaul to keep sand and salt storms in the Aral region. Scientists propose new models of agrarian-forestry reclamation, considering that the plantings of saxaul and other plants are important outside the reservoir of the Aral Sea.

The saxaul bush is a home for the saxaul sparrow, jay, beetle – saxaul goldfish and others. It is food for animals and birds. It protects the soil from wind erosion, retards dust storms, inhibits the movement of salt marshes, maintains an ecological balance, has healing properties, and can be used to make medicines. Saxaul contains the rare metal rhenium and alkaloids, which are used to treat cardiovascular diseases.

In ancient times, saxaul ash was used to make soap: animal bones were put into a cauldron and boiled, fat was released from the bones. When the mixture cooled down, saxaul ash was added to it. The soap was used for washing and treating skin diseases.

The peculiarity of saxaul is that it cannot be cut down, it is not suitable as a building material and sinks in water. The benefit of saxaul is that one bush stops 4 tons of landslide and holds 10 sq.m. sand. Thus, the shrubbery prevents desertification.

Salt and dust can be stopped by phyto-forest melioration – planting halophytic plants: saxaul, sarsazan, karabarak (belyanzherovsky salt grate), tamarisk on the seabed, prone to rain-fed and saline soils, in compliance with agrotechnical requirements. 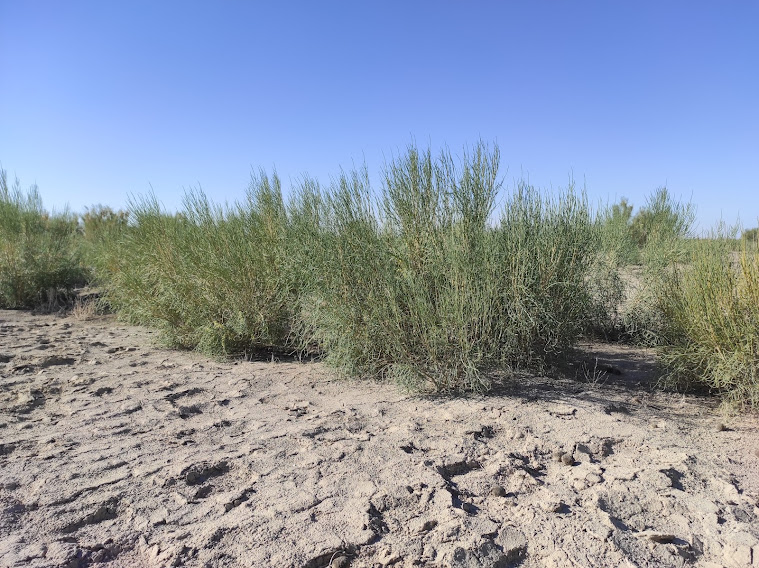 International organizations help to solve the problems of the Aral Sea. With the support of the Republic of South Korea, which allocated 1.7 million dollars, the Ministry of Ecology, Geology and Natural Resources of the Republic of Kazakhstan implemented from 2018 to 2020 a project on phyto-forestry works at the bottom of the dried Aral Sea. 5 million saxaul saplings were planted on 13.3 thousand hectares of land. The works were carried out by the Aral and Kazaly forestry institutions subordinate to the regional akimat.

Workers from the villages of Akerek, Kambash collected saxaul grain, brought it in, grew it, foresters planted it on the bottom of the sea. A carriage was issued, they worked on a tractor, two planting machines. The workers received a monthly salary of 25-30 thousand, so they worked for 3 years. 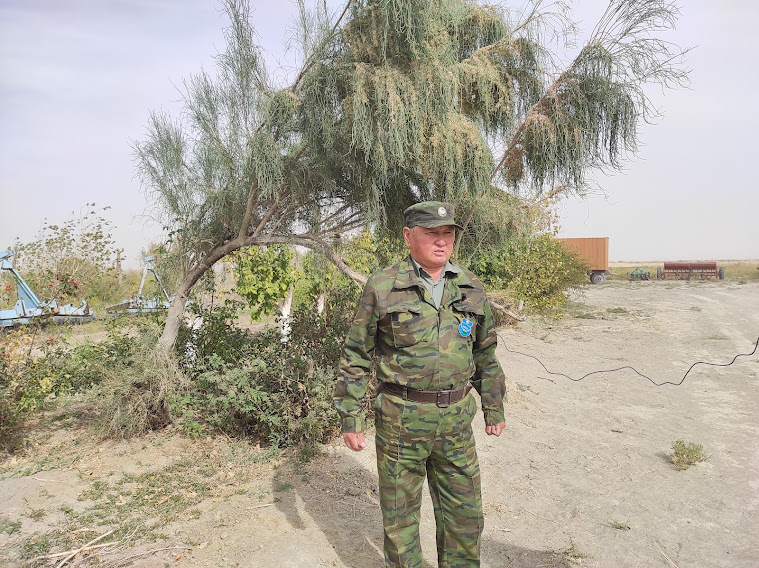 – We have a body that checks the number of trees planted – how we sow, plant. They come, give maps, measure the land, mark, say where to plant, – says the master of forest care Bektemir Zhusupov.

A comprehensive plan to increase the volume of forest reproduction and afforestation of the Kyzylorda region for 2021-2025 was approved in agreement with the Ministry of Ecology, Geology and Natural Resources of the Republic of Kazakhstan. 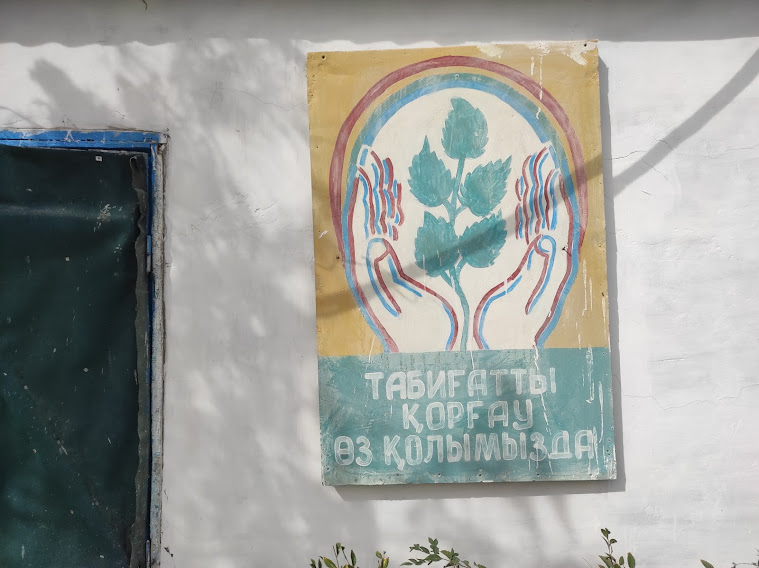 Last fall, the area of ​​forest nurseries for saxaul seedlings was increased from 22.6 hectares to 100 hectares. Next year, 30 million saxaul saplings (300 thousand saplings per hectare) will be harvested from these nurseries.

At the expense of a non-repayable loan from the World Bank, it is planned to implement the project “Landscape Restoration of Kazakhstan”, worth 4.340 million US dollars.

The project provides for the execution of a number of works in Zhambyl and Kyzylorda regions. These measures will have a significant positive impact on improving the environmental situation in the Aral Sea region.

– Many desert plants are succulents, these are annual hodgepodge: saltwort, sveda, half-shrubs: sarsazan, potash, karabarak shrub. Their feature is to stock up on moisture. Of the deciduous species, clumps of tall shrubs of saltpeter, comb and chingila are widespread.

In general, the biodiversity of the Aral Sea region has not changed. The regulator of the biodiversity first of all, is the climate, as well as the introduction of invasive species that are not characteristic of this region, says biologist Natalya Ogar.

Certain work of forest pathologists is carried out on local foci of diseases.

The Aral Sea needs to be restored completely 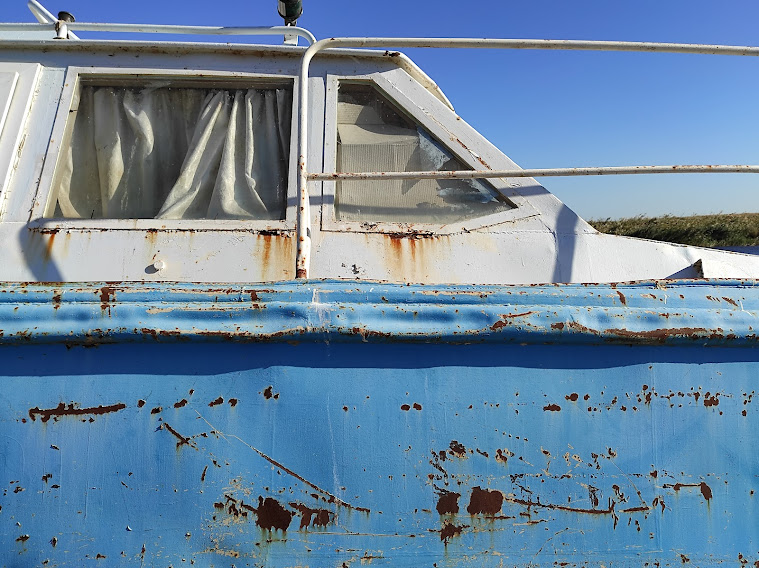 – The most difficult thing is to equip and restore the southern Syr Darya and Amu Darya rivers, which flow from south to north and flow into the Aral Sea. There are Talas and other rivers, there are hundreds, maybe thousands. Each channel, even temporary watercourses, can be arranged, conditions can be created to reduce the transpiration of moisture from the underlying surface and increase the flow into these channels of rivers, streams, temporary and more or less permanent streams. This is progressive work, which is beyond the power of either the state or anyone. This can be done by people if they are made a rule not only for agricultural activities, but also for forest reclamation,” says dendrologist Vladimir Yezenok.

For that purpose, it is necessary to stimulate these farms in various ways, to help attract investments from abroad. The farmer himself, the private trader, is legally and technically difficult to understand these issues.

– We need a special structure that will oversee all education, help in financing, in scientific support and in many other respects. We need a serious scientific and practical structure, which will be engaged in helping farmers to equip such farms with a certain focus, with a set of certain types of crops that we have tested,” says dendrologist Vladimir Yezenok.

Scientists were surprised that you can get fantastic yields, reduce transpiration, and increase air ionic productivity. Each plant emits air ions, phytoncides are released into the atmosphere. 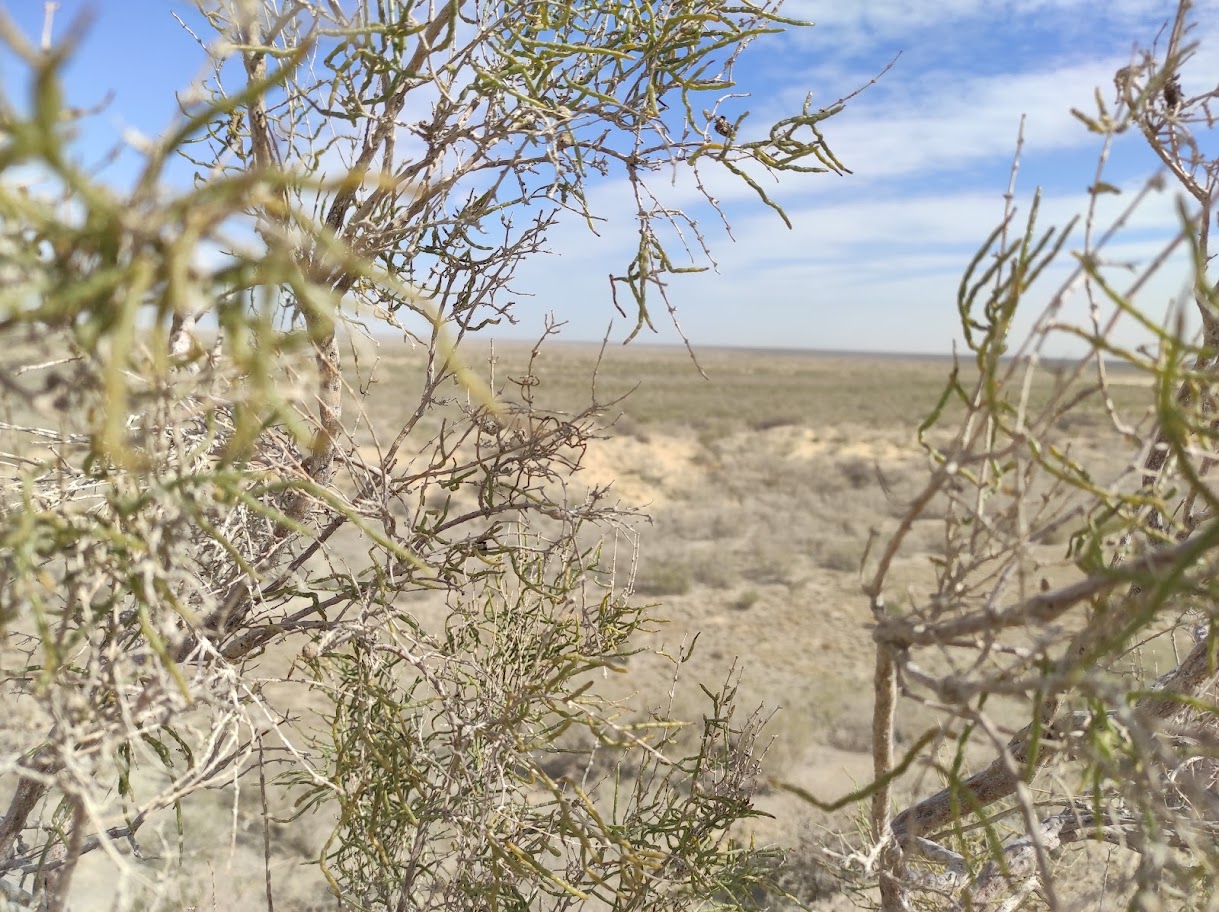 – All climatic processes on the planet, precipitations are controlled by the air ions emitted by plants. Professor, academician Chizhevsky, who was engaged in helium ecology, spoke about this at one time. All clues and origins are found here. No dams are needed, this is a complete absurdity, you need to fill the rivers with water and direct them a little in the right direction to the Aral Sea. The water that goes to the takyrs in the south, almost near the Aral Sea. It is in the amount in which it leaves and should leave, the water that flows along the Ishim and goes to the north is in that amount and should leave, we should not take a drop of this water, – says dendrologist Vladimir Yezenok.

The scientist believes that the saxaul plantation plays a positive role, but this role is the thousandth of a percent. The performance from these saxauls, reeds and everything else? It is necessary to create an economic model that would involve people, give a highly effective result, cost-effective, at the first stage, certain amounts are needed, completely new technologies are needed, approaches to agriculture, to the cultivation of crops, not those that have developed today.

Succulents are essential in nature.

– We offer highly productive, sufficiently salty and drought-resistant, saline-bearing crops. The removal of salts from the soil is very important. I offer comprehensive work, new models of agrarian and forest reclamation activities. Our work must be approved by experts and specialized institutions. This applies to soils, hydrology, geological basis, plants, fauna, climate, specific area. The economic activity of the regions in the area of ​​potential projects, the state of environmental, epizootic situations. Working with the bottom of the Aral Sea has no long-term prospects. It is important, of course, but it is more important to fill the Aral Sea with water! Don’t build dams! There are enough of those. Plantations of saxaul and other plants are important outside the reservoir of the former Aral Sea-lake, says dendrologist Vladimir Yezenok.

Comprehensive work is needed to create water conduits and culverts in the Derzhavinsk region, in the places where the tributaries of the Turgai River converge with the Ishim River. 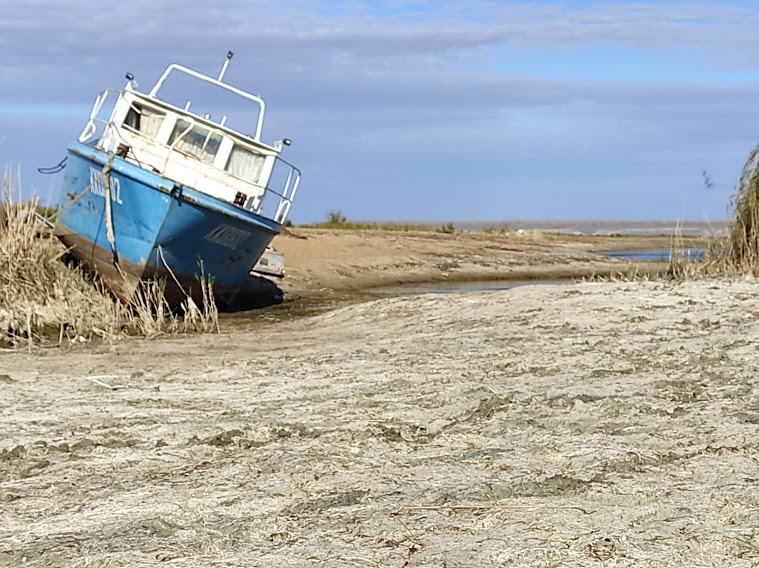 – Water conduits from other northern rivers (Tobol and a lot of small rivers …) to Turgai and along its channel, to supply water to forest reclamation zones. We have more than enough of our own water! It is important to fix the water, to increase it, create conditions for increasing the flow and correctly direct it. And the Aral bottom can be covered with hydrogels and the salt can be fixed safely. The Aral Sea should not be rescued in parts, but restored completely! – says dendrologist Vladimir Yezenok.

Greening program of the drained bottom of the Aral Sea

The area of ​​the forest fund of Kazakhstan is thirty million hectares. As part of a large-scale greening program for the country until 2025, it is planned to plant two billion trees. Of these, 1.5 million hectares will be increased by planting saxaul on the territory of the drained bottom of the Aral Sea together with Uzbekistan.

On the instructions of the Head of State, it is planned to plant saxaul seedlings on an area of ​​1.1 million hectares on the drained bottom of the Aral Sea within 5 years.

According to the data presented by Madi Nurpeisov, head of the Department of Forestry and Wildlife Committee of the MEGPR RK: “The average cost of 1 piece of saxaul seedling in Kyzylorda region is 40-45 tenge. There are nine nurseries in the Kyzylorda region: one permanent in the Kazaly district and eight temporary nurseries. The number of nurseries in the republic is 202 units with a sown area of ​​808.3 hectares, the availability of planting material is 165 million units”.

The approved Comprehensive Plans envisage an annual increase in the sown area of ​​nurseries to ensure the required amount of planting material. The purchase of seedlings from other countries is not planned. 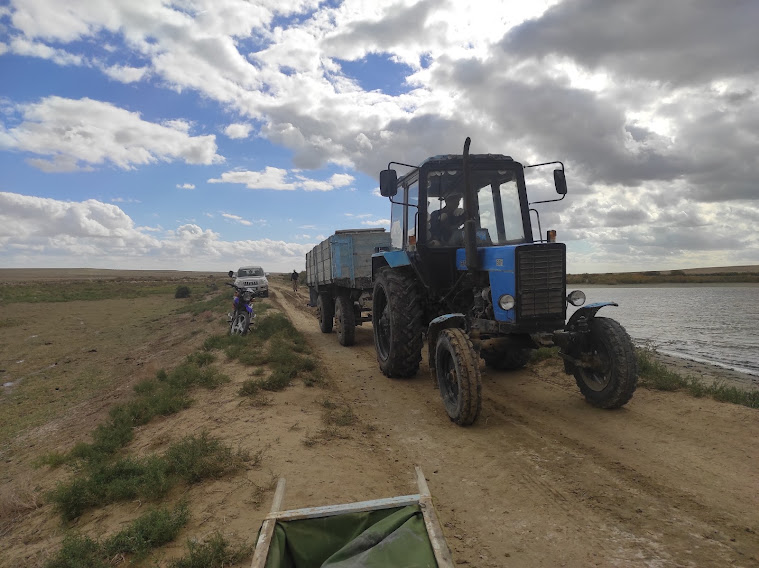 The saxaul planting project involved 10 people from the Republican Forest Seed and Seed Center (RLSTS), subordinate organizations of the Committee for Forestry and Wildlife and forest owners of the Kyzylodinsky, Turkestan, Almaty, Zhambyl regions, employees of the Aral and Kazaly forestry enterprises. In the current year, work is carried out in one shift. With an increase in the volume of planting, work for the next years will be carried out in 2 shifts.

The sponsors of this project are the World Bank, the German Society for International Cooperation GIZ, negotiations are underway with other national and international organizations.

If we add up all the efforts made to preserve the drained bottom of the Aral Sea, residents of the Aralkum village, employees of forestry, the Ministry of Ecology, Geology and Natural Resources of the Republic of Kazakhstan, scientists, international organizations, then perhaps this “drop in the sea” will become visible, and we will be able to save at least the current boundaries of the Aral Sea.

The material was prepared with the support of the International Center for Journalism MediaNet.

This publication is part of the project “Facilitation of the cross-border environmental reporting in Central Asia” implemented by MediaNet International Centre for Journalism in cooperation with the international media development organization DW Akademie and funded by the German Federal Foreign Office (Auswärtiges Amt).

You can find the Russian version of this article in the link below: https://el.kz/ru/news/obshchestvo/kaplya_v_more_ne_vidna-_-_2/